Marie Rosenmir has established herself as a versatile artist and one of Sweden’s most promising young conductors. 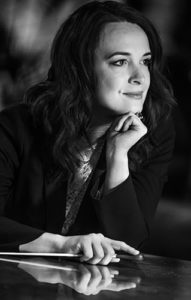 She has a background as a pianist, organist and singer with a soloist diploma in organ playing from Academy of Music and Drama in Gothenburg, focusing on historical performance practice. She studied conducting for four years at the Royal Academy of Music in Stockholm with Prof. Jorma Panula and Alexander Polischuk and in 2004-05 she studied singing at the University College of Opera. She has also taken an active part in numerous master classes and her teachers include Elisabet Söderström, Graham Johnson, Thomas Quasthoff, Alan Gilbert, and Johannes Schlaefli.

During the season of 2001-02 she worked as assistant conductor at the Gothenburg Opera. In 2004 she was awarded first prize and the audience award in Malmö Vocal Competition and the year after she made her operatic debut at Folkoperan as Aricie in Rameau’s Hippolyte et Aricie and as Juliette in Roméo et Juliette by Gounod to great reviews in national press.

Marie has an extensive repertoire ranging from baroque to contemporary music and she has premiered several orchestral works and songs. In 2005 she was one of the founders of the contemporary music group Inversion and together with KammarensembleN, Swedens most renowned contemporary music ensemble, she made recordings for the Swedish National Television and Radio, as well as two concert tours. She is also an active champion of Swedish music.

Marie Rosenmir has received several awards and prizes. Three times she was awarded the Royal Swedish Academy of Music scholarships in organ, singing and conducting. In 2006 she was the winner of the Swedish Conductors’ Award and the same year she got the Marianne and Sigvard Bernadotte Arts Fund Award. In 2011 she received the Crusell Scholarship.